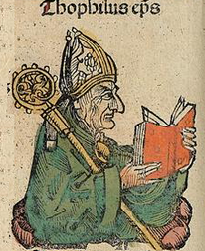 Theophilus of Antioch (Antakya, Turkey) is another second century church father. I did not see a year for his birth, but he is believed to have died in 181 or 188 CE. Theophilus was born a pagan, but he eventually believed in Yeshua after studying the Scriptures. He eventually became the sixth bishop of Antioch in what was then Syria during the reign of Marcus Aurelius.

Theophilus wrote several works; however, all that exists now is a series of three books to Autolycus who was an idolater. He called Theophilus a Christian, “as if it were a damning name to bear.” Originally, the name Christian was a negative appellation that was possibly related to false accusations of sedition and crime. Theophilus avowed that he was a Christian as being a follower of Christ and bore this name while hoping to be serviceable to God.

In his first book, Theophilus explains to Autolycus that God is seen by those whose eyes of the soul have been opened. He reveals the nature of God through a series of many names that describe God’s attributes. Some of these include:

When addressing Autolycus, Theophilus made an interesting quote regarding man’s inability to behold God:  “As, therefore, the seed of the pomegranate, dwelling inside, cannot see what is outside the rind, itself being within; so neither can man, who along with the whole creation is enclosed by the hand of God, behold God.” Prior to this, Theophilus said, “For as the soul in man is not seen, being invisible to men, but is perceived through the motion of the body, so God cannot indeed be seen by human eyes, but is beheld and perceived through His providence and works.” It is God’s works, His creation, that Theophilus introduces Autolycus to. He goes on to encourage Autolycus to let faith and the fear of God rule his heart. He discusses the absurdity of idolatry – idols not being real gods, but being the works of men’s hands and unclean demons.

As I continued reading the first book, I was delighted to see how Theophilus used examples to prove the resurrection. For example:

Theophilus explains the two options to Autolycus – life (immortality) by patient continuance in well-doing OR ever-lasting fire to those who live unrighteously.

In his second book, Theophilus explains that Autolycus had urged him to more accurately demonstrate “the vain labour and empty worship” in which Autolycus was held. Theophilus begins by noting that when idols are made, they have no value until they have been purchased. He also asks what became of the gods – they who were begotten should have produced many more offspring than men have done. He points out that Mount Olympus, which was formerly inhabited by the gods, is now deserted. Having said this, Theophilus tells Autolycus: “But this is the attribute of God, the Highest and Almighty, and the living God, not only to be everywhere present, but also to see all things and to hear all, and by no means to be confined in a place; for if He were, then the place containing Him would be greater than He; for that which contains is greater than that which is contained. For God is not contained, but is Himself the place of all.” So, Theophilus’ god is far superior to those of Autolycus. He goes on to explain that when man makes an image, that image has no ability to reason, breathe, or feel. Man can’t give those things to what he has created. On the other hand, when God creates a work, He endows it with reason, life, and sensation. Therefore, God is more powerful than man; God creates things out of nothing, and He creates what He wants as He desires.

Theophilus goes on to explain how the world was created by God through the Word: “… then, having His own Word internal within His own bowels, begat Him, emitting Him along with His own wisdom before all things. He had this Word as a helper in the things that were created by Him, and by Him He made all things. He is called “governing principle” [ἀρχὴ], because He rules, and is Lord of all things fashioned by Him. He, then, being Spirit of God, and governing principle, and wisdom, and power of the highest, came down upon the prophets, and through them spoke of the creation of the world and of all other things.” Theophilus further refers to how the Word spoke through Solomon, in Proverbs 8:22-31, explaining that the Word existed at the beginning of YHVH’s work — before the beginning of the earth and the beginning of the depths.

Theophilus recounts the creation as described in the Scriptures. Because I enjoy typology, I will share the types Theophilus explained to Autolycus:

When I discussed Dialogue with Trypho by Justin Martyr, I raised the possibility that God, who walked in the garden, was really the Word – Yeshua. Afterall, no one has seen God, but Yeshua has been seen. Theophilus confirms this idea when he described the time when God conversed with Adam in the garden. Theophilus said, “But what else is this voice but the Word of God, who is also His Son?” Further, he states: “… the Word, that always exists, residing within the heart of God. For before anything came into being He had Him as a counsellor, being His own mind and thought. But when God wished to make all that He determined on, He begot this Word, uttered, the first-born of all creation, not Himself being emptied of the Word [Reason], but having begotten Reason, and always conversing with His Reason. And hence the holy writings teach us, and all the spirit-bearing [inspired] men, one of whom, John, says, “In the beginning was the Word, and the Word was with God,” (John 1:1) showing that at first God was alone, and the Word in Him. Then he says, “The Word was God; all things came into existence through Him; and apart from Him not one thing came into existence.” The Word, then, being God, and being naturally produced from God, whenever the Father of the universe wills, He sends Him to any place; and He, coming, is both heard and seen, being sent by Him, and is found in a place.”

Later, Theophilus offers an interesting idea. He suggests that the tree of knowledge itself was good, and its fruits were good. Theophilus said that the problem was Adam and Eve’s disobedience. Who is to say that God simply wanted to delay the consumption of the fruit until a time in which Adam and Eve were more mature? Parents often make their children wait to engage in certain activities until they are considered old enough. I thought this was an interesting concept because God only seems to give knowledge and wisdom to those who have been obedient and who seek it with their whole hearts. YHVH is very selective when it comes to who He reveals His secrets to. He does not to reveal His secrets (pearls) to people who are like swine – those who will abuse it or not appreciate it, or who think that you must be able to do something with that knowledge. Sometimes knowledge does not require application; it often simply gives us a heightened level or depth of understanding of God — His nature, ways, and plans.

By Theophilus’ third book, Autolycus is still convinced that the word of truth is an idle tale and that the Scriptures are recent and modern. Theophilus feels that Autolycus has been deceived by the false accusations and rumors made against the Christians. Theophilus’ response includes an explanation of God, His law, and the history of His people as outlined in Scripture. He explained the need for repentance when the law was transgressed, as well as righteous living. He told Autolycus how prophets — such as Isaiah, Ezekiel, Jeremiah, Hosea, Joel, Zechariah — called people to repent and instructed them regarding how to behave and think.

Theophilus corrected the errors of the Greeks regarding the flood and the history of Moses. He corrected the idea of Manetho who said the forefathers of Israel were lepers, and for that reason, they were expelled from Egypt. Theophilus made the claim that the priests healed every disease, so that they cured lepers and every unsoundness – this, of course, is not something I’ve ever seen in Scripture.

Theophilus recounts history and sets forth a historical time line. According to Theophilus, all the years from creation to the time of the death of the Emperor Aurelius Verus is approximately 5698 years, which he has broken down into various time periods – with Moses having lived somewhere about 900. He does say that there could be an error in his numbers, but that it would be small. By recounting the periods of Israel’s history, Theophilus demonstrated that the Scriptures are not recent or modern but are truly ancient and set forth from creation itself.

Overall, I see no major errors in doctrinal interpretation, in regard to Theophilus’ apologetic books to Autolycus.